When exploring the possibility of life beyond Earth, astronomers seek out Goldilocks zones, potentially habitable regions surrounding stars that possess “just right” atmospheric pressures and neither too hot nor too cold temperatures for terrestrial planets like ours to potentially exist. Second-home buyers exploring the vast constellation of beautiful but diverse islands of the Caribbean similarly seek out locales with conditions optimally suited to their particular needs.

While most Caribbean destinations offer inviting climates, dazzling beaches with ocean views and a complete sense of decompression and retreat, there still exists a broad range of cultures and languages, as well as degrees of sophistication and lifestyle ranging from rural and relaxed to the ultra luxurious. Among these choices, St. Martin—34-square miles of paradise roughly 200 miles east of Puerto Rico—has become one of the Caribbean’s most complex and well rounded.

“We have a little bit of everything, so we’re attractive to a wide variety of clients,” — says Lesley Reed, Owner/Broker of St. Martin Sotheby’s International Realty.

St. Martin is divided between two European jurisdictions, the French on the north side, and the Dutch territory on the south side, creating a rich cultural interplay. In addition to the 39 beaches that circle its perimeter, the English-speaking St. Martin is known for the Continental outlook and boutique shopping in the French city of Marigot, excellent cuisine in its popular cafes and restaurants, a thriving nightlife based around clubs and casinos on the Dutch side, and quiet, contemplative coastal nooks overlooking secluded coves and bays.

St. Martin’s stable affiliation with its parent nations provides an additional layer of reassurance to property owners from traditional markets in the U.S., Canada and Europe. Also reassuring is the ease of access, with direct flights from a number of major international cities. “Our buyers like the idea that they can come directly in on a four-hour flight from Toronto or Montreal or New York and in most cases be at their property within an hour of landing,” Reed says.

Informed investors know that the most prestigious oceanfront and hillside villas, which begin around $3 million, are located on the island’s French side in enclaves like Baie Longue Beach, Baie aux Prunes and Baie Rouge Beach in the Terres Basses near Marigot, or around Orient Beach on the island’s east coast. Meanwhile, Cupecoy Beach, on the southern coast, is home to a majority of the island’s luxury high-rises.

Add these elements together, and more buyers now than ever are discovering in St. Martin an almost perfectly balanced atmosphere. With stunning ocean-view properties, direct flights, a strong European lineage and eclectic range of cultural and entertainment diversions, it’s a destination that feels just right. 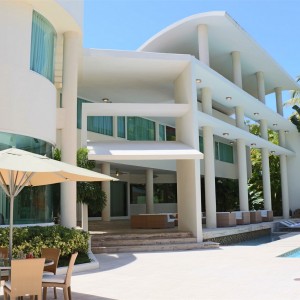