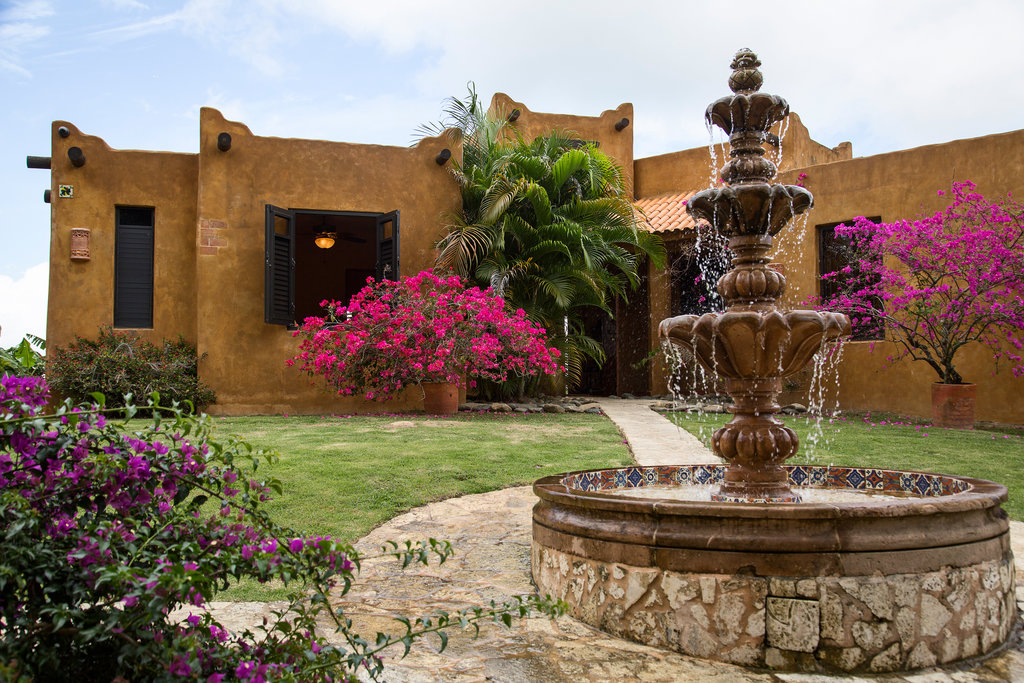 This four-bedroom three-bath house in the city of Luquillo has an unusual look for Puerto Rico: It is designed in the Pueblo Revival style typically found in the Southwestern United States.

“I wanted to build something unique,” said Rosa Jusino, the seller, who is a real estate lawyer with a love of horses and historic architecture.

The villa, named Rancho Soberano, or Sovereign Ranch, sits at the end of a long, tree-lined driveway. The front of the house faces El Yunque rain forest, and the back faces the Atlantic Ocean. The front doors, which have quaint adornments including a lookout window, lead to a foyer. Just past it is the living room, which has 15-foot ceilings and a rounded kiva fireplace. It may seem unusual to have a fireplace on a tropical island, Ms. Jusino said, but lighting a fire or heating up bread there feels homey. 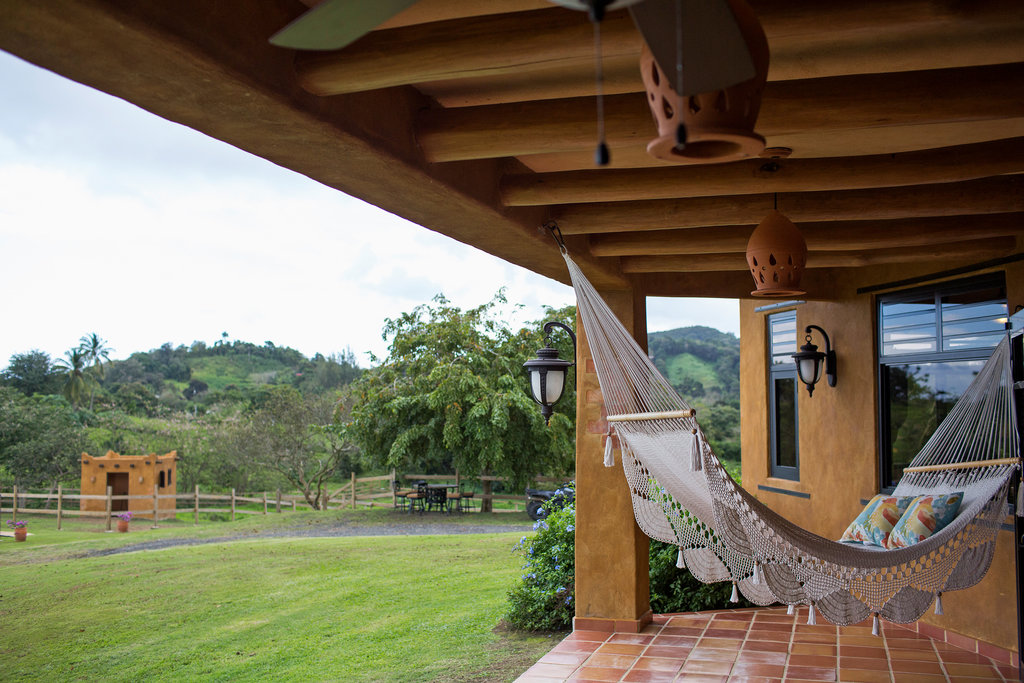 The open kitchen, which includes a dining area, is to the right of the living room. On the other side of the house, to the left of the living room, are three bedrooms, including the master, which has an en-suite bath. It also has a rounded wall with windows that overlook the yard and the ocean in the distance. Two other bedrooms next to it share a hall bath. The fourth bedroom has an en-suite, wheelchair-accessible bathroom, Ms. Jusino said.

Though the 3,000-square-foot house, built in 2009, looks as if it were made of adobe, the material is actually reinforced concrete with an antiqued finish. “It’s rustic, it’s simple, it’s in harmony with Earth,” Ms. Jusino said. She ordered Talavera and Saltillo tiles from Mexico and clay sconces from Texas. The custom carved wooden corbels and wrought-iron gates came from local artisans. There are ceiling fans throughout, and three of the four bedrooms also have individual air-conditioning units.

The villa’s design lets nature in through its use of terraces and patios. A hallway from the living room leads to a semi-enclosed, open-air room facing the rain forest. Immediately outside the living room is a covered terrace with a hammock. The décor and furnishings, including many hand-painted pieces, are not included in the asking price but are negotiable separately. 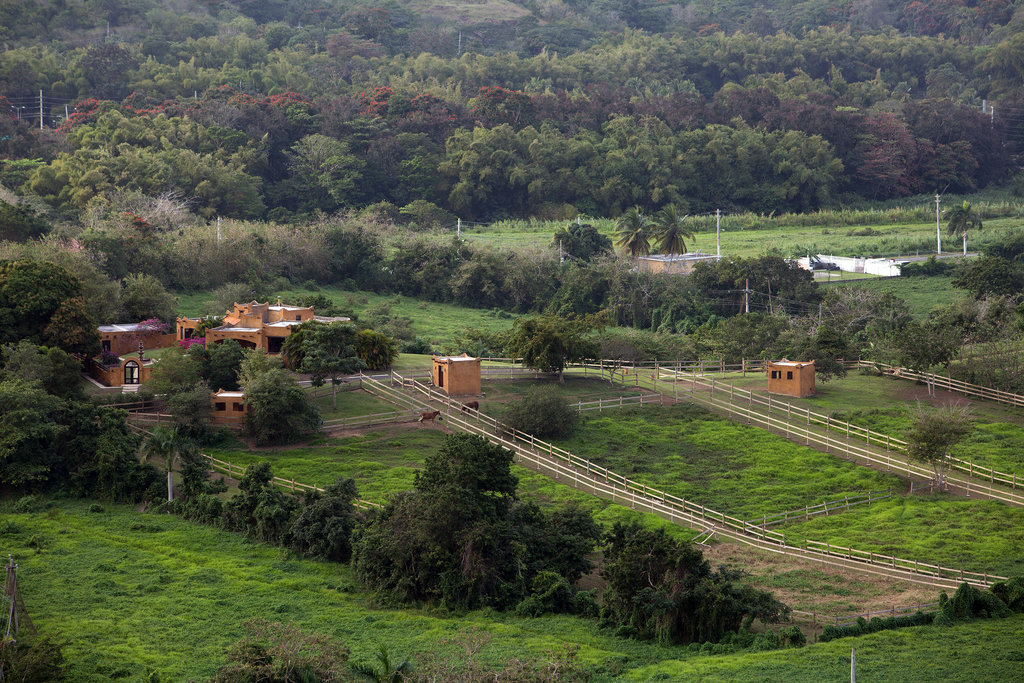 The home is in the city of Luquillo, population 20,000, on the island’s scenic northeast coast, said Oriana Juvelier, a vice president of Puerto Rico Sotheby’s International Realty, which has the listing. The property, which has equestrian facilities that include three stables and four paddocks, sits on 4.1 acres on a hill about two miles from the ocean. It’s possible to ride horseback to the beach, Ms. Jusino said, and the rain forest is a short drive away. The airport is 25 minutes away, and Old San Juan is a 40-minute drive, Ms. Jusino said.

WHO BUYS IN PUERTO RICO?

But Ms. Juvelier said that Iberia and Norwegian Air Shuttle have started offering direct flights, reflecting an increased interest from Europeans. Her agency has also had buyers in the last 16 months from United Arab Emirates, China and Canada, and inquiries from Japan. “That’s directly through tax incentives,” she said. 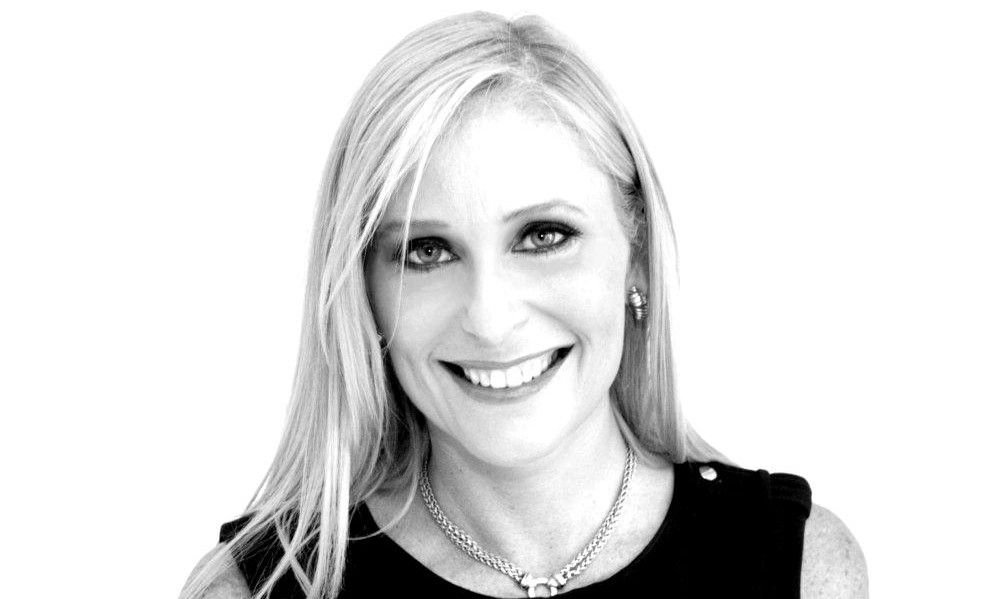 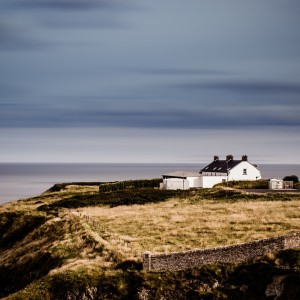