On a one-acre lot in the gated, private estate section of the 1,900-acre Dorado Beach Ritz Carlton Reserve resort, this flat-roofed postmodern white concrete home is a canvas for art and sculpture, inside and out. A terraced brick paver path leads from a circular driveway to a glass double front door protected by a portico.

Inside the multilevel house, a contemporary wood and stainless-steel railing stretches across an entry gallery illuminated by clerestory windows and outfitted with custom-built nooks, a library and a powder room. The living room and family room are down two steps to one side of the entry, punctuated by three floor-to-ceiling fluted stone columns.

The dining area is a few steps lower to the other side. A grayish beige granite floor runs throughout the six-bedroom home, which includes six full baths and one half bath. The granite is repeated on the kitchen countertops. The kitchen, to the back of the house, is outfitted with wood cabinetry, a center island with a raised breakfast bar and stainless-steel appliances, including a gas Viking range and a Sub-Zero refrigerator. Windows create a pass-through from the countertop to the patio. Sets of double-glass doors open from the kitchen, a gallery space and the family room to a terraced patio with a small round children’s pool and a free-form main pool.

A large red mural decorates the outside wall of a service bungalow, which could be converted to a cabana or pool house. There is also an outdoor shower.

Curving concrete terrace steps and walls divide the pool area from a backyard lushly landscaped with fruit trees, flowers and art-filled pocket gardens. The half-dozen stone sculptures that resemble oversize buttons are negotiable, as is the furniture inside the home.

Off the second-floor landing, the master bedroom suite has a balcony overlooking the pool and gardens, as well as his-and-hers office spaces, a sitting area and a large walk-in cedar closet. Its en-suite bath features twin white ceramic countertop vanities, a bidet and a tub/shower combination. Another doorway off the landing opens to a hallway leading to three family bedrooms, one en suite and two sharing a hall bath.

A hallway off the kitchen leads to a temperature-controlled wine cellar that holds 600 bottles, a guest bedroom with an en-suite bath and a cedar-lined closet, a laundry room and, in what originally was the garage, a media room/children’s playroom. A gated driveway to the right side of the house has room for five to six cars.

Thirty minutes from San Juan, the Dorado Beach Ritz Carlton Reserve is an escape with a five-star resort hotel, seven communities including estate homes, villas, townhomes and apartments. Once a coconut and grapefruit plantation, Laurance S. Rockefeller opened a hotel on the site in 1958. The palm-fringed refuge with walking trails and three miles of sun-kissed Caribbean beaches attracted such luminaries as Elizabeth Taylor, Joan Crawford and presidents Dwight D. Eisenhower and John F. Kennedy. These days, the amenities of the year-and-a-half old Ritz Carlton Reserve — including a beachfront restaurant, fitness center, a five-acre spa, swimming pools, a water park, and three golf courses — are accessible via golf cart.

“The high end of the market has and is rebounding,” said Margaret Pena Juvelier, the broker-owner of Puerto Rico Sotheby’s International Realty, which has the listing. “Puerto Rico had been in a deep slump since the downturn of the economy” when prices plummeted 35 to 50 percent, she said. But since a new tax law passed in 2012, Ms. Juvelier said she is “seeing a lot more people coming to Puerto Rico and taking advantage” of the tax incentive to buy homes.

Local buyers, who had “essentially disappeared,” Ms. Juvelier said, realize “the market hit bottom and are coming in and buying at a very good price,” buoyed by an improving economy and renewed confidence.

In coveted luxury areas like Dorado Beach and the 485-acre St. Regis Bahia Beach Resort on the eastern end of the “isle of enchantment,” prices are higher than ever. New beachfront apartments at the Ritz Carlton Reserve range from $3 million to $7 million for a duplex penthouse.

WHO BUYS IN PUERTO RICO

Buyers are coming from across the United States, Ms. Juvelier said. Beyond buyers enticed by the new tax incentives, the rough winter in many parts of the United States spurred interest in Puerto Rico among second- and third-home buyers.

Mr. Hernandez, the accountant, said the new tax law incentive already has brought in “a diversified and dynamic group” of new buyers. “Most recent investments in the real estate sector have been driven by and/or for the new Puerto Rico residents.” Under Puerto Rico tax rules, an individual must spend more than 183 days in Puerto Rico to be presumed a resident. But under American tax rules, he also must have his “closer connections” and a “tax home” in Puerto Rico to be treated as a bona fide resident. 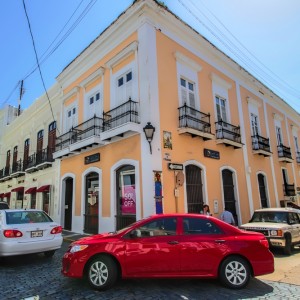